I’ll be honest… I’m pretty main stream… Which I realize is: Well — boring.  According to experts at a recent Brewer’s Conference, it was speculated that by the end of 2016, hop-heavy IPAs will make up one-third of the nation’s craft beer.

And to be honest – I’m part of that crowd. Lately, IPAs are the only thing that I seem to drink, but let’s face it: the bitterness and high ABV tend to mix poorly with the scorching summer sun. So Hence, with the opening of the “New Beer store” in town, I have been trying to change it up a bit.

During the hot months, we need to quench our thirst, but we want a beer that’s not thin—one that has body and complexity. Right?  The summer provides a host of opportunities for extended periods of drinking, from backyard barbecues to a multitude of sporting activities, or just plain laziness on a chair watching other people perform such activities. (My preference – for the record is: the lazy part.) We don’t want a beer that feels like the above picture as we wipe our brow of sweat.

For us in the Northeast, it seems to me, (And I could be wrong) that Boston Brewing were one of the ones to introduce us to seasonal brews in order to quench our thirsts during the varied weather that the Northeast provides us with.  It seems that because of this, many choose to hit off the summer with Sam’s and/or many other breweries “Summer Brews,” that are laden with “Wheat” varieties and/or: they hit up a mass-produced Mexican lager. That’s not necessarily a bad choice. Meh – To each their own.

Again, While good choices to some, I myself have found 2 beers that I will probably be keeping in my cooler while chilling in the “hot Sun.”

On a whim I picked up at the Beer Store an American Ale from the Colorado Brewing Company called “Left Hand Brewing.”  They have a very tasty beverage in their “Nitro” series called “Sawtooth.”

I found this medium Amber brew with a 5.3% ABV to have a very nice creamy taste with very little nose to it. The bitterness to me is very mellow and thus it finishes on the watery side, which in my mind, makes it a perfect summer brew to consume. 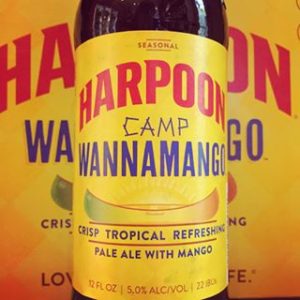 Ironically, I’m really not a huge fan of “Fruit in Beers.” Miller Beer’s “Man-Law” commercials aside, I’m usually just not a fan because in essence: there are only a very few who can carry it off well.

Now Campwannmango has carried this off very well in my opinion, with a soft Hoppy nose, with evidence of the Mango, and a few other fruits as well. It pours a beautiful golden clear color. The Mango taste is definitely there but I do not find it overpowering in fact I find it very pleasant if not “Thirst Quenching.”.  It’s not heavy at all in carbonation but it still has a nice head to it.  The taste finished somewhat dry but since it’s light in ABV at 5.0% you certainly do not feel too bad to pull another sip.

Now of course I know some of you out there are shouting out at me to try some shandys out there – and I hear you. I have done so and Travelling Beer certainly has some tasty offerings.  Unfortunately “Wies Biers” and I just don’t get along very well sometimes.

But feel free to comment and tell me: “What Beers should I be drinking this summer?”