It happens every summer. Actually, it begins to happen on Memorial Day weekend. (Considered by most to be the official kick-off weekend of the summer.) People will walk up to me and ask the age old question of most Americans:

“How do we chill our beer really fast?”

The reason it is mostly just Americans who ask is – Well, We Americans are obsessed with iced cold beer. No amount of argument from the rest of the world, or many an articulate Beer enthusiast has been able to change the mindset, but the fact is: Americans love our Macro Beers Ice cold. We just do. And when it comes to most Macro Brews? I agree…

So there you are, you planned your party. You got 15-25 of your friends coming to your house to kick off your summer. And just before people are scheduled to show, you realize: in all your haste to prep food, décor, and make sure the grill has charcoal and/or gas, (Depending on your grilling preference.) you suddenly realize you forgot to chill the beer. 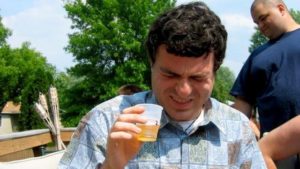 It seems for Americans, who turn to light beers from the Macro Giants, we seem to be supremely embarrassed if we dare to present someone with a warm beer.  And those who get handed said warm beer, will not accept the: “Well that’s how they serve it in Europe” excuse. For some reason when handed said beer and after that first sip, we grimace and make faces as if we have just tasted the worst thing on the planet.

I could create a whole different article on the ideal temperatures of all the myriad different types of beers available from your local beer source, but that’s not what you want to read about. You just want to know what the fastest method of getting said beer to the lowest desired temperature.

It’s universally agreed by all beer enthusiasts that: Just about every mainstream light Lager put out by all of our current Macro Breweries are best served anywhere from 33-40 degrees F. Some will even go far as to put their stamp that says the exact is actually 38 degrees F because that covers the Pale Lagers and traditional Pilsners as well.

So you have 15 minutes till your first guest shows up and you got a full on case of 36 beers that are at 65-70 degrees room temperature… What do we do?

Seriously, Just Use a cooler. 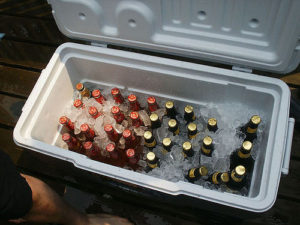 A lot of people will tell you “Throw it in a freezer.” And while it will work – it’s actually not a fast method because Air will not transfer the temps fast enough and it will take almost a full hour to do it and  let’s face: invariably you forget about one or 2 of the cans or bottles and they freeze, then expand, and then you have beer all over your frozen food, and the ice you are making for the other mixed drinks people may wish to consume. So the freezer is really the last resort.

So if you have a large’ish cooler, carefully fill the cooler with both beer and ice. Ideally, you want ice around each can/bottle and not have cans and bottles touching each other. Now add some water, and every once in a while as you are spreading hor’s devours, and chips, and dip, and you happen to pass said cooler, spin each bottle a bit. Not enough to shake them just spin them around a bit to make the liquid move inside the cans and bottles. This method should chill your beer in about 10-15 minutes.

Want to do it faster? 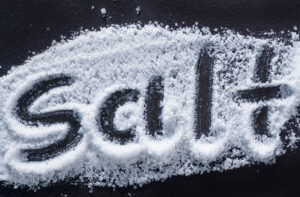 Well if you used a 3lb bag of ice and put your beer in the cooler, and you put some water in there and you still want to chill it faster? Well, pour about a cup of salt, (rock or granulated. Doesn’t matter) all over the ice and water. Continue to jiggle the bottles and cans and using this method you will actually chill your beer in well under the 10-minute mark. Some say less than 5. The reason this works is that the Salt will mix with water and allow the water to get below the freezing temperature that the ice is already at. Because the colder the water is the more cold surface area covering the cans and bottles thus, chilling the beer that much faster.

The only drawback of this method is they you will need to rinse the salt water off of the can or bottle.

So – there you have it. That’s how you chill your beer really fast. Or do what I do… Don’t worry about food, and décor, until after you have made sure the Beer is being chilled…

How do you make sure your beer is chilled?

Beer is proof that God loves us and wants us to be happy.