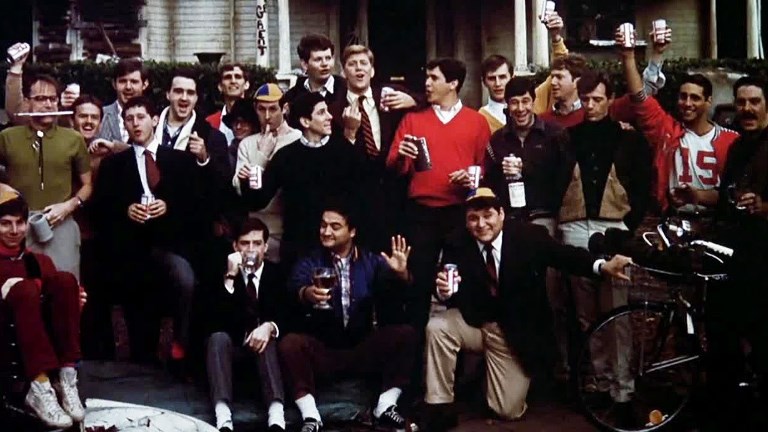 When they arrive at college, socially inept freshmen Larry (Thomas Hulce) and Kent (Stephen Furst) attempt to pledge the snooty Omega Theta Pi House, but are summarily rejected. Lowering their standards, they try at the notoriously rowdy Delta Tau Chi House, and get in. The trouble is, the college dean (John Vernon) has it in for the Deltas. He has put them on “Double Secret Probation” and secretly assigned Omega’s president (James Daughton) the task of having their charter revoked. Hands Down this is the best college comedy ever made. Nothing has ever come close to comedic perfection, and never will. Director John Landis directs this film into greatness bringing stars John Belushi, Tim Matheson, Peter Riegart, Mark Metcalf, Donald Sutherland, Karen Allen, and even Kevin Bacon, to the screen in brilliance. True, this film is just about a bunch of misfits defying authority in a campus of 1962, but that’s what makes it so good, and original. Belushi, Metcalf, and others bring many of the laughs here, but it is mainly it’s reputation that brings this film into hilarity. A true landmark in cinema comedy that is best enjoyed with beer and friends..

There you have it. The definitive list of 25 movies to watch with your friends and a few beers. What movies did we forget? Comment below

You can’t buy happiness…but you can buy beer and that’s kinda the same thing….